For those paying attention, I know I said I was going to quasi-live blog this trip…and obviously that didn’t happen.  It was an ambitious plan from the start, but unfortunately time was against me and there just wasn’t enough to focus on writing.  Our schedule fell apart pretty early on due to some fairly obvious miscalculations and oversights on my part, which I’ll get into later.  In the end, I decided to just take some rough notes and wait until I could dedicate enough time to properly put everything into words instead of just writing as quickly as I could until sleep took over.  Also, I was able to curate some photos to accompany the posts.  As I receive more, I will post more, so these next posts will be growing as the days go by.  So with that, let us begin our journey.

About midway through the planning phase of this trip, we were set on a time table of 4 days.  The question began to grow on which days we should go: Thursday-Sunday or Saturday-Tuesday.  We quickly settled on the latter as the former gave us a pretty strict start time while the latter allowed for some leeway.  So much leeway, in fact, that we decided that instead of waiting until Saturday morning to leave, we’d just leave Friday evening.  I was able to get a half-day, as was my brother, so all we had to do was wait on DynamicDs and Team Adorkable to show up and we were golden.  That time was estimated to be about 4pm.

I had my brother pick me up at my house around 1pm and we headed to his house.  He had already gotten the rental the night before so we had a chance to look it over and determine it was perfect for our needs.  A 2013 Chrysler Town & Country fully loaded, with Stow-n-Go and captain’s chairs in the middle row.  This would do us nicely.  As we waited for the others, the matriarch of Team Duckman assisted in tagging the windows of the van with our names and such, just like our last CIA trip.  Might as well continue tradition, no? 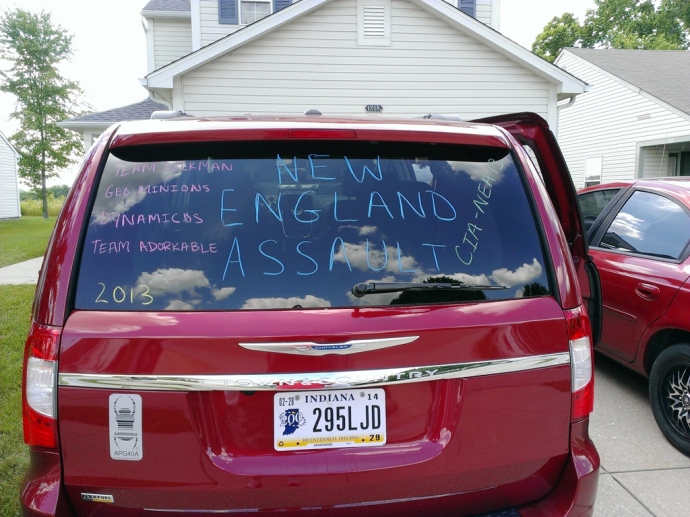 I think that sums things up

The rest of the group arrived pretty much on time and we spent a few minutes getting things loaded up and saying good bye to my brother’s family.  Then we were off.  It was about this time that I had my first minor setback.  The day before I had made some updates to my tablet, which was to act as my caching PC for the trip.  As such, I was having some difficulties in getting it to connect to my phone’s hotspot to download a couple files I needed from Dropbox.  It got to the point where I had to have my brother pull into a McDonald’s so I could connect to their Wifi to get what I needed.  This ate up a good 15 minutes of our time and was not the best start to our trip.  To add further frustration, as soon as we pulled out of the parking lot, the tablet decided it wanted to connect to my phone…typical!

Our first scheduled cache was about 30 miles away and was, according to the description and satellite photos, a fairly easy P&G.  However, when we arrived to the area of the GZ, we noticed real quick that something was amiss.  The satellite photos showed the cache to be in or near a lightpole on the side of a building.  Where we were was a field of overgrown grass, shrubs, and flowering trees and what appeared to be the rubble of a former building.  While I am not opposed to traipsing through an abandoned lot looking for a cache, there was around 500 miles between us and our stop for the night and this was obviously going to take longer than the 5 minutes I planned for it, so we decided to abandon the search and move on.  There was another cache in Indiana we planned to do another 20 miles down the road, which turned out to be every bit as easy as it was supposed to be, so there wasn’t any hurt feelings about missing it.

Our next cache was another quick P&G off an exit on I-70 just west of Dayton.  I know it sounds like a pretty crappy trip thus far, going out of our way for P&Gs instead of some real, quality caches, but considering the plans we have for the rest of our trip, we can afford to be a little skimpy here and there.  We continued eastward for another 90 minutes or so until we reached Columbus, OH.  I had picked 2 caches in the downtown area for us to do, based on a decent amount of Favorite Points being awarded to each.  The first took us to the capital building, where there was a statue we had to glean information from in order to claim credit.  DynamicDs, Team Adorkable, and myself jumped out to claim it while Team Duckman circled the block as there wasn’t any place to park without paying.  This was a quick find for us and it only took one loop before we were back in the van and on to the next cache, A Sunday Afternoon Cache.  Now here was a cache that was worthy of the points it received.  Another virtual cache, this one took us to a park that was once the location of a school for the Deaf.  It was a quaint little urban park, and in the center was a beautiful topiary garden.  I’m not going to give away anything, but if you look at the picture below, and are knowledgeable about either art OR scenes from Ferris Bueller’s Day Off, you should recognize what this.

You remember how I mentioned some miscalculations and oversights in the first paragraph?  Well, this is where that comes into play.  For all the planning I had done, all the routing and rerouting I went through, all the meticulous note taking and calculations I had performed, there was one key thing that I failed to take into account on every step of this trip:

Yep, I had gone so far into planning out this trip that I completely overlooked the need to stop to stretch legs, use the restroom, eat, or even get gas.  I had mapped out the estimated prices for gas and mentioned where we should be when we had to fill up, but I never bothered to add it to the itinerary.  We were leaving Columbus when the first pangs of hunger began and decided to stop about 20 miles east of Columbus at a truck stop.  After dinner we grabbed a cache that was in the trucker lot out back, but once all was said and done, we had burned up just over 80 minutes.  This is time I had not banked on us spending and while I knew there was an end point to our day and that we wouldn’t be jeopardizing our time for any of our scheduled stops, this now meant we’d be arriving to our stopping point later than planned.  And it was about an hour later when I realized my next oversight…I didn’t bring my route info.  I knew that going into PA there were several different way to go and I had picked one in particular that would shave off almost 40 minutes of driving time that the other routing systems wanted us to go.  I didn’t have any exit information written down or any route information outside of the basic outline I was using for notes.  It didn’t become apparent until the GPS told us that we’d be arriving at our stop around 2am.  I had us stopping just before midnight.  I frantically tried to recreate the correct route on my tablet and phones, but to no avail.  None of the road names sounded familiar and both navigation apps I tried to use routed me the same as the GPS.  I had to admit defeat and accept that we were going to be losing around 2 hours of potential sleep time.  We had one more stop that first night, filling up the tank at the West Virginia/Maryland border, and made it to our stop for the night at a Pilot station just before 2:30am.  Exhausted, I fell asleep pretty quickly….it’s too bad we only had about 4 hours to sleep before we had to be back on the road.  I don’t think any of us got that full 4 hours.

Categories: A tale from the GZ | 4 Comments